I was fishing East Lake with Central Oregon Project Healing Waters (COPHW) last Friday. It was their annual East Lake outing. I’m not a Veteran, but have helped out with COPHW for a few years as a Board member, fly tying instructor, and mentor. I just stepped down from my Board responsibilities.

We rounded the corner and had our first view of East Lake and were pleased the water was flat…NO WIND! Hopefully, this would be a good day.

After launching the driftboat around 9 am, we headed to the COPHW campsite to see if anyone wanted to fish.

I met Ed who lives at Crooked River Ranch. Breakfast was being cooked, but he had already eaten breakfast, so Karen and I invited him to fish with us for awhile.

His rod was rigged up with a sink-tip line and bugger of some sort. We encouraged him to switch his reel to a dry line as we planned to fish the rock wall and try to find a fish eager to eat Beetle Bailey.

Off we went. I had Ed fish from the bow and Karen behind me as I took the oars. Oh, remember there was no wind??!!??

Ed didn’t need much coaching as he could cast. Only later did we discover he only had about 30 feet of fly line remaining on his reel! For some reason, he had cut the line several times. Maybe he was a little new to this fly fishing game! Much later, he thought purchasing a new fly line might be a good idea. I agreed!

My wife landed 3 fish, while a few others came to her fly. But I was most excited when Ed hooked up on a Rainbow Trout about 17 inches. He played it well, but the fish broke off. Oh, how I had hoped for a picture.

A few Callebaetis mayflies were taken by fish. A couple of fish rose to my RiverKeeper Callibaetis Emerger

Occasionally, the wind would start to blow and I thought it would only get stronger… and then it would die down.

We fished until around 1 pm, with fish rising occasionally for them to cast to.

Upon returning to camp, I stayed with the boat as Ed and Karen went back to camp. He was the first to arrive and quickly stated Karen had three fish to the net. I think he had a great time.

We fished for a few more hours with more fish to our flies…sometimes hooking up, sometimes not. But we had action.

I even fished and was able to land a few. I especially like this picture with Beetle Bailey floating in the upper right corner

The wind was kind to us most of the day and we ended up fishing longer than I expected. I’m usually on the oars for better control, but was able to use the electric motor so I could fish as well.

Most of the fish we landed ended up being Brown Trout, which was surprising to us.

We’ve observed that Brown Trout take the fly differently than Rainbows. They lazily eat the fly and you have to slow down setting the hook or you’ll take it out of their mouth.

Here is one of my fish. I like this picture because I can’t tell if the fish is in the water or floating in clouds.

We couldn’t camp with them this year, but I think they had a great time.

Thanks again for your service!

I’m looking forward to the 2017 NW Fly Tying & Fly Fishing Expo at the Linn County Expo Center in Albany, OR on March 10 & 11, 2017. It’s only 2 weeks away! The main attraction for me is the 200 demonstration tyers that rotate every 2 ½ hours on Friday and Saturday.  There are… 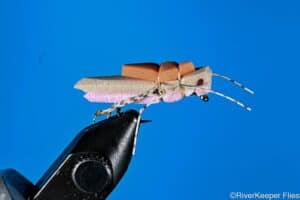 This week’s Throw Back Thursday Fly is the Ken Morrish Hopper. I recently listened to a podcast from Wet Fly Swing where Dave Stewart interviewed Ken Morrish. In the podcast, Ken talked about developing the fly in 2010. Knowing how deadly the fly imitates a grasshopper, I was astounded that Idylwilde Flies passed on the… 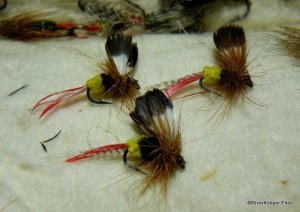 Yes, another week has passed and it’s time for the next version of Throw Back Thursday Flies…how about bees? I found these bees in one of my antique fly wallets. Sorry, I can’t help you with the name. I’m just guessing it’s a bee pattern. But I could be wrong. What do you think it is? But I… 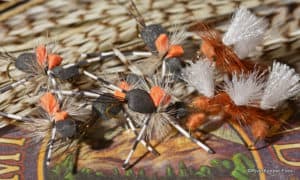 I wrote a post entitled Fly Fishing with Beetles almost two years ago touting how effective fly fishing can be with a beetle on the end of your line. I’m still a believer. I fish a fly I call Beetle Bailey. I shake my head in disbelief and smile at how effective Beetle Bailey catches fish! Beetle Bailey…

If you’ve followed RiverKeeper Flies for a while, it won’t come as a surprise I might be a little obsessed with Green Drakes, from tying effective imitations, fishing the flies during a hatch, and creating images through my photography. In fact, I’ve been thinking about them all week. I taught a Zoom fly tying class…