Oh what a difference a couple of weeks make! We made our return to East Lake on Sunday with high hopes because of the terrific fishing we experienced a couple weeks ago. You can read about it in my Early Season Fly Fishing on East Lake post. While we did catch a few nice fish, it was VERY different.

Before you say anything about night fishing, this beautiful Brown Trout was caught at 7:45 pm and I used a flash, which makes it appear darker than it really was.

After fishing the first day, it was the only fish we caught! Honestly, we were very surprised.

Two weeks earlier, the fish were rising with reckless abandon to our flies. We didn’t expect that type of fishing on this trip. But we did think we would have several fish to the boat.

And speaking of boat, here is our craft as we headed out the first day.

We were lucky and found a lakeside camp spot for one night. By the time the tent was pitched and boat launched, there were swarms of Callibaetis spinners flying around.

A fish came up almost immediately on my wife’s Callibaetis Spinner fly pattern, got hooked and swam straight for the boat…and got off. It slowed down considerably after that.

A few fish would rise randomly and sporadically, so it was difficult to target a fish. And they didn’t seem to be interested in the spinner fly patterns we had tied on our tippet.

We fished hard, returning to camp around 8:30 pm and the only fish landed was that brownie.

The next day we rose to wind and waves. It blew most of the night. I didn’t want to fight the wind, so we decided to pack up camp and trailer the boat to the other side of the lake, hoping to find less wind.

Well, that didn’t work so well either. Seems like the wind followed us all day.

The Callibaetis finally began to hatch and fish were showing themselves. I think the fish gods were smiling down on us as we did end up landing 4 fish between us.

Here is my only fish of the trip, a nice 18″ Brown Trout.

And a beautiful Rainbow my wife caught.

It was a wonderful couple of days at East Lake…so beautiful up there.

But there certainly was something happening at the lake. Fish were hard to find. We can usually see them swimming in the water and can find a willing one that will eat our fly. Terrestrial fishing was almost non-existent as well.

I wonder what was happening?

We plan to return in the near future and see if our luck will change. 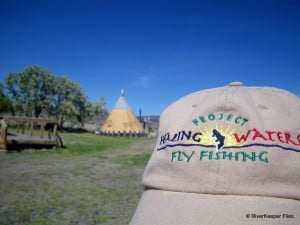 Central Oregon Project Healing Waters had an outing at Lake in the Dunes last week. What a wonderful event and turnout. Had just shy of 20 Vets out fly fishing. Oh the joy on their faces. This happens to be one of the volunteer efforts taking up my time when I’m not fly fishing myself. I…

Our home waters, the Metolius River, had been closed below Allingham Bridge for a couple of weeks due to the wildfires ravaging Oregon. Smoke in Sisters had been unhealthy, much like a lot of Oregon cities and the rest of the West. The smoke cleared for a couple of days and my wife looked at… 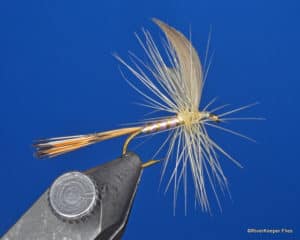 This week’s Throw Back Thursday Fly is the Pink Lady, a classic Catskill fly. This Pink Lady was tied by Bob Kern at the International Federation of Fly Fishers Fair in Livingston, MT in August 2016. Bob did an amazing job of mounting the wings, utilizing the double-slip quill wing style. He drove all the way to… 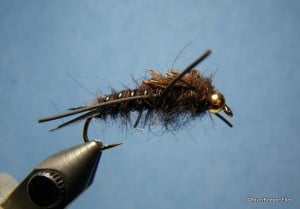 This week’s Throw Back Thursday Fly is Kaufmann’s Stonefly Nymph. Kaufmann’s Stonefly Nymph was created by Randall Kaufmann in the early 1990’s. I first found the fly in the classic book entitled Tying Nymphs (1994) by Kaufmann. It was listed as the Kaufmann Golden Stone, Rubber Legs. The write-up described the Golden Stone version, along with the… 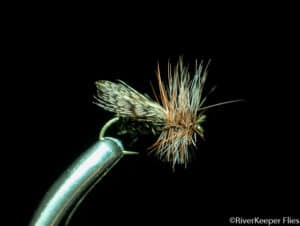 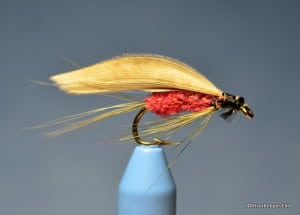