Fly casting to windows? You probably think I’ve lost my mind. What am I talking about?

Have you ever really looked and studied the water when you are waiting for fish to rise? Notice how the currents change? Perhaps you’ll see some riffle or nervous water, then all of a sudden the section you are looking at is clear as a window pane. That’s what I’m talking about.

I’ve found over the years that I observe more. I used to get to the river and immediately wade into it and begin fishing. I don’t wade as much anymore and I catch more fish. Don’t get me wrong, I’ll wade when I need to. Now I walk up to the water and look for rises or rings that don’t look like normal current. You get to know the river by watching.

Just a quick story about the benefits of watching the river. I met a fisherman on the Metolius River a few years ago. He was sitting on a log watching the river. He did that a lot. Watched and waited. When he saw fish working, he’d start fishing. It paid off because he hooked the biggest rainbow I’ve ever seen on the river. Since he didn’t have a net, I offered to help net the fish and he said “yes”. I have a pretty good size river net, but the fish wouldn’t fit. The second try, I tailed it. I taped it at 26 1/2″!

But let’s get back to windows.

In the spring creek I fish, I’ll decide to drift a fly in a specific line where I saw a fish rise. But there will be numerous micro-currents between me and that fish. If I just cast to the spot, inevitably the micro-current will catch the leader and cause the fly to swing immediately, thereby eliminating the drag-free drift I’m trying to obtain.

Don’t know why it took so long, but all of a sudden it hit me. If I cast to the smooth water, not only could I see my fly, I’d have a longer drift. I started calling those “windows”. I’ve learned to watch for those windows to open. And they always do. You might have to wait an extra cast or two, but they’ll show themselves.

Try using a parachute or puddle cast which creates immediate slack when the fly hits the water.

Finding those windows and dropping a fly in them allows it to float drag-free longer. And in those sections of river where there are many currents between you and the window, I only expect to have a very short drag-free drift; say 4 – 10 feet. But that’s when I’m casting to rising fish.

If I’m blind casting, I’ll hope for a longer drift. But I cast to an area I’ve seen fish rising in before. And I’m still looking for widows to open up.

I’m looking forward to the 2017 NW Fly Tying & Fly Fishing Expo at the Linn County Expo Center in Albany, OR on March 10 & 11, 2017. It’s only 2 weeks away! The main attraction for me is the 200 demonstration tyers that rotate every 2 ½ hours on Friday and Saturday.  There are…

This week’s Throw Back Thursday Fly is Ray Bergman’s Sanctuary. It’s been a while since I featured a classic Ray Bergman fly. The Sanctuary is a very simple soft hackle fly that is listed on Plate No. 8, page 222 of Bergman’s Trout (1940 – fourth printing) As I’ve mentioned many times, I enjoy highlighting a… 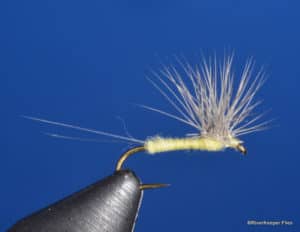 This week’s Throw Back Thursday Fly is the Hackle Stacker, a style of fly developed by Bob Quigley in the late 1980’s. Bob fished the Hackle Stacker in Southern Oregon and Northern California. The fly utilizes a paraloop technique by winding the hackle around a flexible post of some type. The fly above is a… 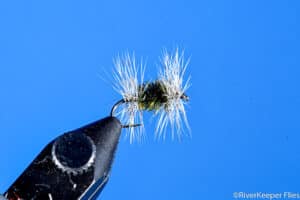 This week’s Throw Back Thursday Fly is the Grey Ugly. Recently, a potential customer contacted me to see if I would tie some Grey Ugly flies for him. I had never heard of this fly and did a quick Google search to learn about it.

I was on the river recently and was pleased to see a terrific PMD hatch. Yes, it’s that time of year when Pale Morning Duns hatch in droves and the fish are eager to eat them off the surface. I looked back at previous posts and sure enough, I’ve written about these flies in late…

This week’s Thow Back Thursday Fly is a Griffith’s Gnat encore. I’m calling it an encore presentation from the original TBT post in October 2014. I’ve since purchased and thoroughly enjoyed reading The Founding Flies by Mika Valla where he dedicates four pages to George Griffith. As I mentioned in my initial post, Griffith (1901…